Tuesday the 28th we packed and met our tour rep for the 1 plus hr ride to the airport to catch an Air India flight to Cochin. We travelled the same roads that we arrived on in the dark and today were able to see what we missed. A big long bridge is in the process of being built that allows access to the Center of Mumbai and they are continuing building it even further to the south. Along the way we passed the slums where you see the satellite dishes above the tin roofs, then construction for new neighbourhoods. We approached Chhatrapati Shivaji Maharaj International airport where Air India has a domestic terminal. Inside, the honeycombed roof and unique design created a serenity, very quiet, not like the echoes and loudspeakers of most airports. They have created this and other public terminals would do well to use this type of design in my opinion. Travel is very hectic and when there is an opportunity for more peace, I’m all for it.
We were surprised to receive a meal on the plane as it was only a 2 hour trip to Cochin. The sun was setting at 30,000 some thousand feet and we got great pictures of the reds, oranges and blues as the earth spun itself into another day.

We were met by Bridget who was to be our tour guide for the remainder of the trip, a middle aged woman with 2 teenaged children, a lovely wam smile and a heart of gold. At times a little smothering, but the opposite would be worse. We met our driver and his helper and boarded a modern, clean, air conditioned 16 seat bus for our group of 8 plus Bridget. We could spread out. About 1 1/2 half hrs. later we arrived at Brunton Boatyard hotel where we were able to spread out in the larger rooms, with white walls and beautifully finished dark rich looking wood trim. The beds were high and a bench was provided for the vertically challenged. The mattresses were so very plush, Sleep was going to be good! The bathrooms had a large glass showers in the corner, modern toilet and sink and the tub had to be 6 feet long! Too bad there wasn’t going to be much time to make use of it. The bar area was still open for about 45 minutes and we gathered there for drinks to relax for bed. The young bar tender Dons told me about a cocktail that they serve which was made with rum, lime slush and Indian oregano. That was on my list for the following day. The following days schedule had a tour of the area of this Cochin neighbourhood, so as I settled in for the night in the cozy mattress that enveloped my body, I quickly fell asleep. Wednesday January 29 and Thursday January 30.
Even with earplugs in my ears, I could hear a loud rumbling that woke me at 6:00 a.m. I looked outside through the window and saw in the early morning dawn, a ferry boat with cars, small trucks and people crowded on it. These people were on their way to work. Cochin is comprised of 17 islands one of which is a few acres with only wildlife. Our hotel had the ferry terminal next to it.

The breakfast was served either inside the restaurant or outside in a netted patio with a vine that looked like grape on the one end. The waterway was very close so we were able to see boaters, fishermen, barges, ships and birds and unfortunately plastics flowing past with the current. The world seems to be inundated with garbage ending up in our waterways, especially those plastic water botttles. Brunton Boatyard is committed to eliminating plastics, with used newspapers in their garbage cans, glass bottles and glasses to get drinking water. Refillable shampoo, body wash and lotions were in tiny little clay pots in the bathroom.
Breakfast was a plate of fresh fruit, the most wonderful tasting pineapple, sweet watermelon, cantaloupe, orange with plum and guava. The breakfast buffet selection was incredible! Oatmeal cooked in coconut milk was my choice and I gathered some fried potatoes, tomato and pepper along with some bacon which was really tasty! Great food here!

We met and boarded our bus for a tour where our first stop was at the oldest church in the area. Again, the facts can be found on the internet, but the history was first one of the 7.5 churches founded by St. Thomas, Now dubbed St Francis, it was built by the Portuguese, then Dutch then British.

The trees out along the streets were humongous with ferns and many orchids growing on the branches. They reached high up overhead. Along the street were hawkers, only a few and they were very respectable when no was said to them. I bought a cute little folding hat for 200 rupees, about $4.00 Canadian. I don’t bargain too much with them, but they do like the game of bargaining with some of our group.

We walked over to the water where the fishermen displayed their mornings catch. Bridget took us to an area where we could experience what it was like to lower and raise the Chinese fishing nets into the water. Amazing use of rocks tied in the coconut fibres rope, we all pulled together while the group of men chanted I suppose a net moving song, and watch the large net move. What fun!

We then went to Chambakula, a church dedicated to St Mary, where I was able to receive a candle to light for my family and friends.

Outside, was a shrine to the Lady of Fatima, a statue that Bridget says is the original one and the one in Portugal is a copy. All I know is that when Bev and I took a picture of it, the image in the camera was shimmering, vibrating, not a solid picture. It was amazing!!

We then drove to the Dohbi Khana, in Kerala it is a different name than in Mumbai for people who wash clothes. There are 50 families who have this co operative, each has a covered area with a cement tank, buckets of soap, blueing for whites and they wash these clothes with bare hands. 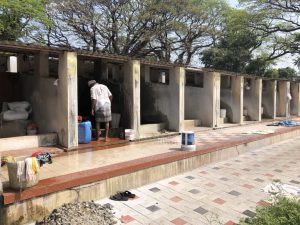 Following the wash there are several lines in a field that have coconut rope twisted in a way that the corners of the items are tucked in and held by these twisted ropes, kind of like my travel clothes line.

Afterwards, in another building are benches along the edge where men and woman iron the dried clothing, some with electrical irons, some with coconut hull charcoal burning in the small oven and creating the heat for the 40 pound iron! You can see the glow of the embers as the iron smooths along, back and forth removing all the wrinkles. Absolutely amazing!

Then we were off to participate in a South Indian cooking class. Charlotte is the owner of Glorias Homestay with a good rating on Trip advisor and hotels.com

She also has chefs come to stay here for a week at a time to learn her dishes to take back to their respective countries’ restaurants. This day we cooked 4 dishes, Muzukuputti, green beans with shallots, curry leaves and spices, Thoran, a shredded cabbage and coconut dish, Shrimp curry and Fish curry with a lovely sauce.

All recipes can be controlled according to the individuals tolerance of heat. Was this ever a good meal! Poor Steve will be my guinea pig again, this time South Indian food!
Following a satisfying meal, we went to visit the Dutch Palace, again, first owned by the Portuguese, then Dutch now back to the locals, but they still call it the Dutch palace. Rooms with dark polished teak and white walls, some with old old murals depicting life of the gods which we could not photograph. Some rooms looked like they had glass reflective material embedded throughout the carved areas of the ceiling, I could imagine how much light one candle could give.

At one point we climbed down into the basement on a ladder and had to crouch down to enter a room which Bridget said was for the ladies. Here on murals restored from the olden times were scenes of Kama Sutra, again a story of the life of gods with people and animals engaging in intercourse in several positions. Again we were forbidden to take photos or video. I had only heard of these scenes and now I saw them in real life.
After climbing up the ladder out of the basement, moving towards the exit and away from the palace grounds, we walked over to Jew Town, where there are only a few Jewish people actually living here anymore. They have moved back to Israel. We visited a woman’s cooperative and were told that these women working here hand made items for sale.

For sale were spices, jewellery, pashminas and other textiles. We made our way to the small synagogue where photographing was not allowed. It was pretty inside with mosaic tiles and several glass chandeliers surrounding the central pulpit.
Upon returning to Brunton Boatyard, we were informed that tea was being served by the pool area and we prepared for our sunset harbour cruise.
The ocean breezes felt refreshing, the subtle smell of salt water and fishing vessels brought back memories of visiting other parts of the world.

We viewed various old buildings in all stages of either reconstruction or abandoned in disrepair, while on another shore we saw modernization of hotels, holding tanks of cement and the port area that had a barge docked. They have one 5 acre island whose only residents are birds, white egrets, black cormorants, the white headed kyte, looking for a meal, then diving and catching a small fish with its talons.

The Chinese fishing nets came into view again and we circled and waited for the perfect time for the photo opportunity of the setting sun. Donna got the money shot with a perfect net and two toned red of the fireball as another day came to an end.

It was really really good! Supper was a chicken sandwich, beautifully presented on a wooden paddle for a dish. Soon, it was time to get to the room, the mosquitos were busy trying to find their nighttime meal. Packing up again and preparation for the next mornings ride to Alleppey for the Backwaters boat experience.

Categories: Around Our World

January 27- 28, 2020 After another great breakfast put on by Gordon House, where they sung Happy Birthday to Marian, we met our Tour Guide with a bus for a city tour. She discussed the Read more…

January 24-26, 2020 Trying to prepare for time away from home is often a frenzied time. Usually last minute items creep in, I wish that once there would be a smooth preparation with little stress, Read more…

Teresa of https://imagineu.ca/contact/ Has the patience of Job helping me get around this blogging thing, lol! This is a test post using an easier format and I can only hope that it works! 4:00 a.m. Read more…